Ben Allen is now on the arXivotubes, with a category-theoretic arithmetic of information.

It looks like a discussion about this is starting over at the n-Category Café. If I didn’t have to spend today cutting down a 12-page paper to eight pages for an overpriced book of conference proceedings which nobody will read, I’d totally be writing more about it!

If John Baez taught at Hogwarts:

When you have two magic wands at your disposal, you can ask if they commute. First wave one, then the other. First wave the other, then the one. Does the same magic occur? Or at least isomorphic magics?

Mike Stay has just posted “Category Theory for the Java Programmer,” an introduction to the subject intended for people with practical programming experience. This is the latest, but hopefully not the last, in a series of introductory articles on his blog:
END_OF_DOCUMENT_TOKEN_TO_BE_REPLACED

ERV made me aware of a new bit of silliness from Denyse O’Leary, resident “journalist” of the antiscience advocacy blog Uncommon Descent. (She’s also a proponent of non-materialist neuroscience: if being a doofus about evolution is a ticket to fame and riches earned by fleecing the gullible, then trashing other well-established sciences must also be quite a racket.) This is what O’Leary has to say on the complicated and tendentious subject of women in science and mathematics, a topic in which even intelligent people are led astray by emotive arguments and spuriously “scientific” ideas not supported by the data.

Anyone who thinks that the fact that girls are not as good as boys in math means that girls do not rule is obviously not in contact with many girls.

Barf out! Gag me with a spoon! Gross!

I’m still not accustomed to the creationist ability to pack so many kinds of wrong into a single sentence. First, the “fact” that girls can’t do math as well as boys is, ahem, anything but; beyond that, what trait makes the female of the species “rule,” in O’Leary’s estimation? Their ability to cook, clean, and fit within a well-molded wet T-shirt? Or a mystic synchrony with the energy of the Moon, no doubt a gender-specific modification of the miracle circuits which receive the soul’s instructions to the brain.

Blech. Uncommon Descent leaves an icky taste all over me. To get it out, I think I’ll learn about adjoint functors and their relationship to monads.

Tired of strange British comedy videos and musical numbers which just get stranger and stranger? Wishing for some serious mathematics on this Web of ours? Well, consider your wishes fulfilled:

Be forewarned — Dr. Cheng goes fast, and she mislabels one arrow in the associativity square ([tex]T \mu[/tex] instead of [tex]\mu T[/tex]) before catching herself.

Via The n-Category Café.

I’ve been going through AndrÃ© Joyal’s category-theoretic construction of the surreal numbers, futzing around to see how restricting the construction to yield only the real numbers affects things. (See my earlier remarks on this and/or Mark Chu-Carroll’s discussion for background information.) If I were an actual mathematician, I’d probably be done by now. Instead, I have a headful of half-baked notions, which I’d like to spill out into the Intertubes (mixing my metaphors as necessary).

Why would a physics person even care about the surreal numbers? Well, ultimately, my friends and I were going through Baez and Dolan’s “From Finite Sets to Feynman Diagrams” (2000), which touches upon the issue that subtraction can be a real pain to interpret categorically. If you interpret the natural numbers as the decategorification of FinSet, then addition is easy: you’re just talking about a coproduct. But subtraction and negation — oh, la!
END_OF_DOCUMENT_TOKEN_TO_BE_REPLACED

I was updating my category-theory reference list when I realized what simply had to be brought into being. Now, I will never be forgiven: 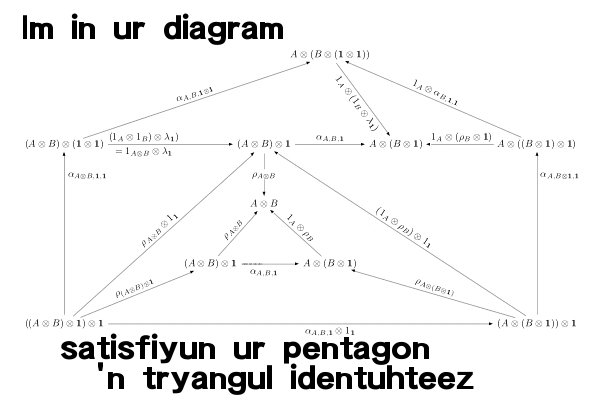 (Original picture from The Unapologetic Mathematician.)

Our seminar series might or might not be getting into category theory in the coming months. (We’re already drawing diagrams and showing that they commute; not everybody knows it yet!) To facilitate this process should we ever go in that direction, and to provide a general public service, I’m compiling a list of useful category-theory resources extant on the Wobosphere. My selection will be pedagogically oriented, rather than emphasizing the latest research; I’d like to collect reading material which could plausibly be presented to advanced undergraduate or beginning graduate students in, say, their first semester of encountering the subject. I’ll be both happy and eager to update this list with any beneficial suggestions the Gentle Readers have to offer.
END_OF_DOCUMENT_TOKEN_TO_BE_REPLACED