Posting will be light this week. With luck, I’ll get a rerun of some old material I wrote at another site up here Wednesday or Thursday. In the meantime, here’s a lengthy discussion at Russell Blackford’s place about emergent properties and consciousness.

When you’re sated on that, check out Mark Liberman’s “Thou shalt not report odds ratios.” See, this is why the denizens of the science-blogging community should include Language Log in their travels: problems like bad math reporting in science journalism affect us all.

QUICK UPDATE: Isabel has more on the bad math in journalism issue at God Plays Dice.

I’m actually surprised I haven’t seen this yet: a LOL-Krazy Kat. 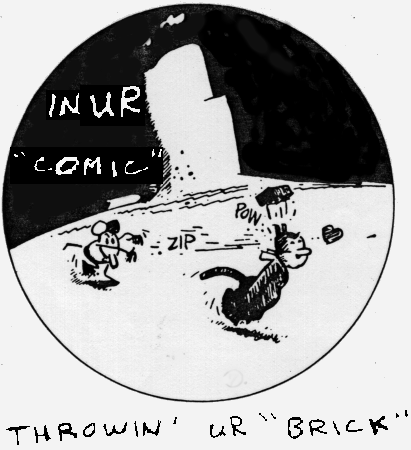 I souped up the “Reader Favorites” list on the sidebar. Instead of being a fixed list, it now plucks a random half-dozen from the Favorites category.

The icon takes the scarlet A from The Out Campaign and John Pieret‘s pensÃ©e flower from here.

Back in the days when postmodernism was almost new and you could still get a good riot at a political party convention, Jorge Luis Borges wrote, “In a modest, silent way, by arranging books on shelves, we ply the critic’s art.” Today, we have all the same literary experiences that previous generations enjoyed, but we do them harder, faster and longer — and perhaps with less silence and modesty, to boot. Most obviously, we “shelve” music and video with the same ease that Borges’ contemporaries arranged books. In our immodest, noisy way, we’ve all been music critics since about 1999.

Even before Napster and the MP3, we made mix tapes; long before multi-gigabyte hard drives, we had the drawer full of VHS cassettes. It’s just gotten easier, more global and more slick. More now, and less TwenCen.

Concomitant with all this has been another change. When, in the early years of the Barnes-and-Borders-a-Million, idle teenagers would move William S. Burroughs’ Naked Lunch (1959) to the “summer reading” section — because there was nothing else to do in Huntsville, Alabama — we (I mean, they) didn’t put up weblogs about the experience.
END_OF_DOCUMENT_TOKEN_TO_BE_REPLACED

The next time I go out to buy office supplies, I fully expect to hear “Smells Like Teen Spirit” being played over the store PA system. You know why? This is why:

Scientific American has a new “special edition” out, this one covering the psychology and neuroscience of children. And they riffed on the Nevermind (1991) album for the cover art. (I guess that means they covered the cover, didn’t they? Thank you, thank you, I’ll be here all week!)

This is about when my mother chimes in saying, “Hah! And now don’t you feel old!”

Remember, it was all the way back in December 1996 when Garth Ennis had a Preacher character reminisce about the days when Nirvana was “everywhere” — and that itself in a flashback, no less. The story with the flashback to the recollection of ubiquitous Gen-X irony (or whatever in blazes that song is supposed to be “about”) is already more than a decade old. Hooray for SciAm driving the point home.

A little while ago, my post on “The Physics of Non-Physical Systems” provoked some good discussion about how science, broadly construed, works in fiction. Perhaps “fails to work” would be a more accurate turn of phrase, since Joshua brought up a good point about the (ahem) midichlorians George Lucas introduced in the Star Wars prequel trilogy.

Why was everybody so annoyed when George Lucas brought up midichlorians in Episode I? Because the idea of microscopic life forms giving people superpowers is unscientific? Or because reducing â€œforce sensitivityâ€ to a bunch of microorganisms in your blood contradicted all the crap about will and focus that was central to the original trilogy?

If the former, then why do so many geeks enjoy X-Men or Spider-Man, whose premises are every bit as biologically nonsensical?

I pause to note that “midichlorian” is not in the Firefox spelling dictionary. Woot.
END_OF_DOCUMENT_TOKEN_TO_BE_REPLACED

I was just going through the ol’ Akismet spam bucket, and I noticed that my blag has recently started receiving astrology spam. First came the “Free Youtube Astrology Videos,” and then the “Free Daily Horoscopes.” Anybody else been seeing these?

It’s quite a combination: spam, an affront to basic courtesy, conjoined with astrology, an insult both to science and to human dignity. I mean, where’s the morality in judging a person by their star sign instead of who they are? Or, worse yet, in saying that those chance alignments of distant planets set limits on who we are, how our personalities can develop and what we can do. If you take it at all seriously, a claim like “Leos are dominant and aggressive but not verbally subtle” is less than a hair’s breadth from saying, “Well, he’s awfully articulate for a Leo, isn’t he?”

The only difference between the questions “What’s your sign?” and “Got any Negro blood in you, boy?” is the history of hatred attached to the latter, and the long timespan astrology has had to distance itself from the days when it was the propaganda tool of tyrants.

Incidentally, you gotta wonder what life would be like if entrail-reading had survived, and astrology had instead been the fortune-telling scam to fade away. Might we be having barroom conversations with lines like, “Why, I’m a pancreas too!” and reading daily newspaper columns about how gallbladders should look to spleens for love?

Vegetarian and vegan pagans might be having themselves a hard time, too. Or would the ceaseless efforts of human inventiveness yield a way to scry the future in a block of tofu?

Dennis Overbye has an article in today’s New York Times on the search for the Higgs boson, and naturally, I’ve got complaints about it. It’s a pretty good piece: Overbye can do solid work (he went a little overboard looking for journalistic “balance” in the Bogdanov Affair, but that was a while ago). Still, I wouldn’t be myself if I couldn’t gripe and grouse.

First, I’m definitely not alone in asking people to please stop saying “God particle.” Leon Lederman has a great deal to answer for after coining this term; I’ve never heard or seen physicists use it seriously, and it keeps inviting unwarranted metaphors. (Incidentally, there was once detected an “Oh-My-God Particle,” a cosmic-ray proton of astonishingly high energy; for recent developments in this ultra-high-energy regime, see here. Physicists joke about the term, but they don’t use it.)

Second, this part rubs me the wrong way:
END_OF_DOCUMENT_TOKEN_TO_BE_REPLACED

So, my joke about ScienceBlogs: The Movie has gotten a little attention, which is nice. Unfortunately, I just received some dire news from a reliable source.

And as was discovered last year, you can’t actually make a movie for the Internet, otherwise you wind up with (2006’s) Snakes on a Plane. “Buzz on the Internet” can honestly sometimes be 200 people talking very loudly.

I was expecting much more evil.

END_OF_DOCUMENT_TOKEN_TO_BE_REPLACED

Zeno mourns that his calculus students can’t read their own handwriting. Not only do their 2s become zeds, but their thetas become phis and their phis become rhos:

Personally, it was the xi which always gave me trouble. That stupid little [tex]\xi[/tex] never came out right — and I know I’m not alone here. In that introductory string theory course of sainted memory, Prof. Zwiebach astonished our whole class by writing them freehand on the blackboard.

You know, in retrospect, I wish my elementary school had skipped the cursive lessons and taught me how to write Greek letters. Oh, and “blackboard bold” characters too, the funky symbols with extra lines like [tex]\mathbb{R}[/tex] and [tex]\mathbb{C}[/tex] (these particular ones are used to stand for the real and complex number sets, respectively). I use Greek letters every day, but when was the last time I had to write in cursive?

My signature doesn’t count. That’s not writing; that’s a mad scribble. I don’t know if Mom ever wanted me to be a doctor, but I’ve lived up to that in one respect at least. My autograph starts with a smushed B, continues with a series of wiggles interrupted by a figure that’s more an ampersand than an S, followed by another brood of squiggles. The cross on the t slashes across my entire name like the mark of Zorro.

And nobody cares! The bank has never returned a rent check to me with a red stamp saying, “D minus for penmanship.”
END_OF_DOCUMENT_TOKEN_TO_BE_REPLACED

The twelfth Philosophia Naturalis carnival is now ontube at Mollishka’s place. If you’re tired of me, run and get your physical science fix elsewhere (be sure to skip my contributions, then, of course)!

Oh, and don’t forget Skeptic’s Circle #65 over at Neurologica!

For the purposes of moral instruction and edification of the youth:

END_OF_DOCUMENT_TOKEN_TO_BE_REPLACED

Do you know what these are? Supposedly, somewhere on the East Coast of the United States (near a brewery), this crawled out of the grass onto a pavement, snaked its way along for about five meters, and then returned to the grass.

I think I first learned the word inverse from Calvin and Hobbes, and in particular the strip in which Calvin ruefully notes, “There’s an inverse relationship between how good something is for you, and how much fun it is” (1 May 1986). The examples leading up to this punchline — he must eat the “slimy asparagus,” he cannot watch the movie Killer Prom Queen — make it clear that “inverse relationship” means that more fun means less good-for-you.

Now, consider what the journalist Johann Hari reports Dinesh D’Souza said on an ocean cruise organized by the National Review.

The nautical counter-revolution has docked in the perfectly-yellow sands of Puerto Vallarta in Mexico, and the Reviewers are clambering overboard into the Latino world they want to wall off behind a thousand-mile fence. They carry notebooks from the scribblings they made during the seminar teaching them “How To Shop in Mexico”. Over breakfast, I forgot myself and said I was considering setting out to find a local street kid who would show me round the barrios â€” the real Mexico. They gaped. “Do you want to die?” one asked.

The Reviewers confine their Mexican jaunt to covered markets and walled-off private fortresses like the private Nikki Beach. Here, as ever, they want Mexico to be a dispenser of cheap consumer goods and lush sands â€” not a place populated by (uck) Mexicans. Dinesh D’Souza announced as we entered Mexican seas what he calls “D’Souza’s law of immigration”: “The quality of an immigrant is inversely proportional to the distance travelled to get to the United States.”

Taking D’Souza’s remark at face value, we can translate it into Orwellian sheep-speak as, “Mexicans good, Northern Europeans bad!” Indeed, seeing that D’Souza was born in Bombay, one must consider his “law of immigration” a statement of becoming modesty on his part.