Evelyn reminds me of just how much a theorist I really am. Go, read, enjoy, but do please save a little sympathy for the fellow back here choking on chalk dust.

Neil Gaiman is considering switching from Vista to Ubuntu. . . and when he visits MIT in May, I’m sure there will be plenty of people willing to help.

Last fall, I helped write and a spoof rock musical called 22. It was a pun-heavy tour of the MIT campus whose “plot,” such as it was, circled around a terrorist threat involving an Infinite Improbability Generator. The title was a sly reference to 24, you see; however, were we to do the same thing today, the same title would let us mock the blackjack movie 21. Here’s the trailer for the movie — extremely loosely based on the antics of a few MIT students — a trailer which I happened to see back in January, at the Science Fiction Marathon:

I could crack a few obvious jokes — I mean, isn’t “Break on Through (To the Other Side)” basically as overplayed as “Bad to the Bone,” and couldn’t we at least get, I dunno, “Love Spreads” by the Stone Roses? More entertaining, perhaps, is the reaction of the MIT News Office, which says of Kevin Spacey’s character, “While his irresponsible acts may enliven the Hollywood script, they are entirely unrepresentative of the Institute.”

Better still, Christopher Orr has reviewed the movie based solely on the trailer above, plus the Internet Movie Database’s list of character names:
END_OF_DOCUMENT_TOKEN_TO_BE_REPLACED

At this moment, these are the most downloaded conference proceedings from the American Institute of Physics:

The third item is Chris Walter’s “Why understanding neutrino interactions is important for oscillation physics” (on the arXiv here). I worked in Chris Walter’s research group a couple summers ago; he’s a cool guy.

This is the sort of thing which tends to get taken off the Network once the Powers Which Be notice that it exists, so we should enjoy it now. Here and there, in chunks of different sizes, we can find James Burke’s original Connections (1978) TV series. Embedded on this page is the tenth and last episode, “Yesterday, Tomorrow and You.” I could say many things about it, but for now, I’ll just note that “network robustness” has become a subject of quantitative investigation, that I can’t escape the feeling the arguments which perennially perturb the science-blogging orbit still aren’t addressing the points which Burke raised thirty years ago, and that you can’t go wrong with Ominous Latin Chanting.

END_OF_DOCUMENT_TOKEN_TO_BE_REPLACED

If you find this strange, you are a victim of American cultural imperialism:

Thanks due to Reginald Selkirk.

Being as it’s almost Friday and I’m not sure I’ll have time to post anything tomorrow, here’s some light and frivolous fare, now:

The cat in the picture is δ Carina. The gospel of the Ceiling Cat is written in the LOLCat Bible.

In the continuing debasement of every scientific word in the English language, today’s installment is the “Quantum Sleeper.” I would have thought this to be a Woody Allen biopic of Schrödinger, but no, it’s a bed — and one which takes the concept of pulling the covers over your head to new heights:

The basic Quantum Sleeper unit consists of an aluminum bed frame and headboard with polycarbonate, bullet proof plating that is designed to provide a protective barrier (shielding) between a perpetrator or environmental condition and the homeowners or occupants.

You also get a “bio-chemical filter in case of bio-chemical attack” and a rebreather system for doing without outside air.
END_OF_DOCUMENT_TOKEN_TO_BE_REPLACED

Ben Allen is now on the arXivotubes, with a category-theoretic arithmetic of information.

It looks like a discussion about this is starting over at the n-Category Café. If I didn’t have to spend today cutting down a 12-page paper to eight pages for an overpriced book of conference proceedings which nobody will read, I’d totally be writing more about it!

I’ve written before about the different ways people define the word Darwinism and its close relatives. The short version is that American biologists and other academics don’t seem too likely to use the word: they just like to say “evolutionary biology” and be done with it. In the U. S. and A., hearing the word “Darwinism” is a pretty sure sign you’re dealing with a creationist, or at least a person whose knowledge of science derives too much from creationist misinformation. Over in Britain, serious academics still use the word, as do people who appear fairly pro-science (maybe there’s some kind of national pride thing going on?). One can still see negative uses of the D-word over in the UK, of course, particularly from people who confuse “social Darwinism” with actual biology or radically misinterpret kin selection and the “selfish gene” idea, but sorting out all their problems would require a book of its own.

Occasionally, people here in the land of motherhood and sport-utility apple pies get upset with Richard Dawkins for using the D-word himself. I mean, here we are, trying to make the point that science is not dogma and Darwin was not a prophet, and then this furriner comes along to screw up the lexicon. So, an event which transpired during a recent Q&A session is rather noteworthy. Both H. H. and Jackie Stone attended Dawkins’s talk at Manhattan’s Ethical Culture Society on Saturday, 15 March; I’ll quote H. H.’s account:
END_OF_DOCUMENT_TOKEN_TO_BE_REPLACED

Thomas Levenson contributes to the information overload by writing a thoughtful post about, er, information overload, and in so doing, he links to Gene Weingarten’s description of the day he buried himself in the “pundustry.” For the sake of the WaPo readers, Weingarten spent Valentine’s Day surrounded by six television sets, two radios and a laptop tuned into the political commentary streaming down through the æther.

I can’t shake one particular impression which Weingarten’s stunt left me: Spider Jerusalem did the same thing, pretty much, in volume 2 of Transmetropolitan — but when Spider watched TV all day, lies were exposed, pundits’ careers were destroyed, and a cooking-show host tried to kill herself by leaping from the roof of a building. 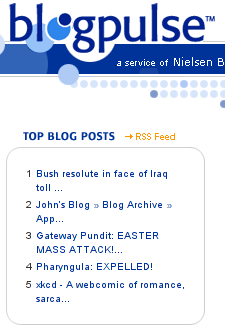 This is fun. According to the Nielsen “BuzzMetrics BlogPulse” website (by Poseidon’s beard, they come up with goofy names these days!), the blog post in which PZ Myers told how he had been expelled from seeing the movie Expelled is now the fourth most popular on the entire Network.

Thanks to Paul Sims for spotting this.

In some parallel world, all publicity is good publicity, no matter how popular you already were or what your intended audience is. However, in that world, Nixon has been beatified, and Osama bin Laden is President of Earth.

While looking for the video I wanted to stick into the previous post, I came across this one too:

This is only one of many ways to prove the Pythagorean Theorem. Another was discovered by James Garfield in 1876, a few years before he became President of the United States.

A while back, Paul Gowder suggested we scientists get our act together and make our own movie, for general consumption, countering the damnable and insipid lies of Ben Stein’s Expelled. Shortly thereafter, PZ Myers noted that, while he was sympathetic to the idea, it would be foolish to neglect the practical experience of filmmakers in doing so: the people who write the screenplay have to know how movies work.

Today, a variant of this proposal occurred to me. Somebody else may well have thought of it first, but I haven’t noticed the suggestion being made. Instead of explaining what evolution is all about, why not make a movie which explains why the Holocaust happened? To be sure, one historian will argue with another about which factors were most important in causing a sustained programme of cruelty to arise when and where it did, but a good documentary could lay all those factors out and, in so doing, make the point that Darwin and Wallace are not heading up the list.

Something tells me this project would be an easier sell than a feature-length nature show (I bet you could get Spielberg as an executive producer). And, at least in general terms, there’s a bit of a precedent for scientists entering this territory:

Discuss: what could be done that hasn’t been done before? What are the up-sides, down-sides and middle-sides of this idea?

John Armstrong raises an interesting question: what books could you give to, say, a bright high-school student seeking an introduction to mathematics? The same question could be asked for physics too, and I’m certainly not above writing a derivative blog post — not to go off on a tangent or anything, but it’s really an integral part of my style.

I’m looking for something a little more focused than John Baez’s list of math and physics books, which covers everything up to general relativity, quantum field theory and string theory. Rather than trying to map out a whole self-study version of an undergraduate degree, I’d like to know what materials might be useful for the student who has enrolled in or just recently survived AP Physics.

Suggestions? Also, for anybody who missed it the first time, my earlier poll, “what’s broken with science blogging?” is still open.

I managed to miss the first anniversary of my own blag! Well, there’s no celebration like a belated celebration, so let’s lay down some drum beats and groove to the funky sound of scholarly activism. A few of the lyrics in the songs sampled in this video are less than safe for work:

Here’s to another year of missing the important stuff.