So: Ryan North, Matthew Bennardo and David Malki ! organized a synchronized book-buying event which propelled their short-story anthology Machine Of Death to the #1 spot on Amazon.com’s bestseller list. Since any bestseller only actually moves a few hundred copies on a single day, they figured, why not get everybody to buy on the same day and push the book to the top of the list for just that long?

It worked. And then it got better:

American conservative talky guy Glenn Beck called us out on his show yesterday because it turned out that his book also had its official release date on October 26th, and he was upset that it was in third place to Keith Richard’s new autobio “Life” and our little book. He told his listeners that he’d worked on his book for over a year, and that his books always debut at #1, and that we (along with Keith) were part of a left-wing “culture of death” that “celebrates the things that have destroyed us” and that everyone should support life by buying his book instead of ours?

Every time you piss off Glenn Beck, a LOLcat gets its invisible bike.

(Whatever you fellows do, I’m buying two copies. I promised my mother I’d get one autographed for her at ScienceOnline 2011.)

UPDATE (29 October): Ach! All my evil plans, they are ruined!

I reposted the previous entry from the depths of the Sunclipse archives because I found the whole “giggling over stuff you don’t understand” theme to be of a piece with this self-indulgently moronic article from New York magazine. The article in question appears to be written by those who, as Greg Egan sez, “have convinced themselves that the particular set of half-digested factoids in their possession perfectly delineates the proper amount of science that can be known by a truly civilised person and discussed in polite company”. Or, as C. P. Snow would have been too quintessentially British to say, we have this Two Cultures nonsense because people are #@!$%ing lazy. I was tempted to rant at some length about it. 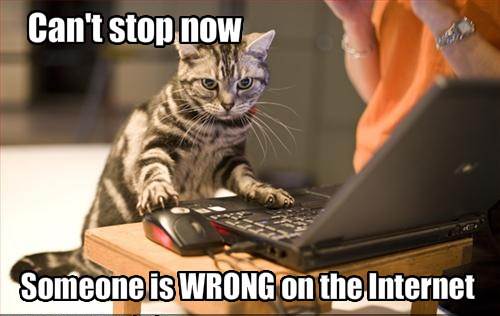 But, as it happens, Zeno has done my work for me.

Woo hoo! Now I can get on with more serious matters (and procrastinate in a way which is safer for my blood pressure).

EDIT TO ADD: Stick around for the comments after Zeno’s post. Turns out, the description for the #1 most “ridiculous” mathematics class is a clumsily-concealed quote mine.

A discussion elsewhere on the ‘tubes this morning reminded me of this, so I decided to dig it out of my archives. Short version: people complaining that something sounds silly got it coming right back at them because they have no clue what they’re talking about.

I haven’t yet seen the remake of The Day the Earth Stood Still. Generally speaking, I haven’t been terribly speedy about seeing movies as they come out; sometimes, I just wait until they’re available on mplayer. The reviews have not been kind, but on the flipside, not all the reviews have been particularly insightful. To wit, here is Alonso Duralde at msnbc.com:

The new “Day” can’t be bothered to include the thought-provoking dialogue of the original, choosing instead to bury the audience with special effects that are visually impressive but no substitute for an actual script. And what words do remain are so exquisitely awful that they provide some of the season’s biggest laughs.

My personal favorite? Astro-biologist Helen Benson (Jennifer Connelly) takes alien Klaatu (Keanu Reeves) to see a Nobel Prize-winning scientist and notes that her colleague was honored “for his work in biological altruism.” What would that entail, exactly? Helping frogs cross the street?

The sound you hear is my palm hitting my forehead, rather emphatically, followed by a howl from deep within my thorax: “Learn to [expletive deleted] Google, you [anatomically uncomplimentary compound noun]!” Just because Chris Tucker of the Daily Mail can’t do a simple web search doesn’t give you an excuse.

Claudia Puig at USA Today is no better:

What, exactly, would that entail? It sounds like something Cleese and his fellow Monty Python wits might have dreamed up.

You ignorant [epithet derived from SF television show]. Why don’t you go [verb unsuitable for a family blog] with Dave White, who apparently thinks that the mere mention of an actual scientific subject makes a movie instant MST3K fodder.

In Scientific American, Michael Shermer gives the movie a mostly positive review, and indicates that “biological altruism” is a real subject. Kenneth Turan of the LA Times is also mostly happy with the film, and he doesn’t crack wise about the “biological altruism” business, though I’m not sure about his grasp of it:

Aside from Klaatu and Gort, the “Day” team claims to have retained the original’s snappy catchphrase, “Klaatu barada nikto,” but it’s so hard to hear that viewers will be forgiven if they miss it. Also still around is the charming blackboard scene, in which Klaatu solves an equation for Professor Barnhardt (John Cleese), a man smart enough to have won the nonexistent but indisputably high-minded Nobel Prize for biological altruism.

Supposing that Barnhardt did work in the field of kin recognition, evolutionary ecology or some such topic which was honoured with a Nobel Prize, it wouldn’t be “the Nobel Prize for biological altruism”, but rather the Nobel Prize in Physiology or Medicine or, possibly, Economics (if Barnhardt’s research focused on, say, evolutionary game theory).

MTV’s Kurt Loder calls the film “boldly mediocre” but says that “biological altruism” is “a very Pythonian name for an actual subject of scientific inquiry”. Stephen D. Greydanus has a similar attitude. The recapper at the Agony Booth was also underwhelmed, by this part and by the rest of the movie:

Helen explains that Karl won the Nobel “for his work in biological altruism.” This sounds like something goofy they made up to make Karl sound noble, but in fact it’s a real field of philosophic study that investigates why, in times of limited resources, individual organisms throughout the animal kingdom occasionally produce fewer offspring (which, in Darwinian terms, is self-abnegation) for the good of the community. Which is great, but since it’s not explained, most of the audience is left to think that it’s something goofy the filmmakers made up.

So, I guess you can still dislike the movie after you’ve looked up the relevant science.

WARNING: This post rated NSFW-17 by the Mainstream Prose Association of America. Contains multiple instances of foul language, all of them, given the subject matter, entirely warranted.

Normally, I take a pretty sanguine attitude to arguments about movies. You can maybe argue somebody into finding a film historically significant, technically accomplished or philosophically interesting, but arguing them into liking or disliking it? I’m not so sure. The popcorn bucket has its reasons, which reason knows not. Debate over matters of sentiment is often a spectacularly futile effort.
END_OF_DOCUMENT_TOKEN_TO_BE_REPLACED

D. W. Logan et al. have an editorial in PLoS Computational Biology giving advice for scientists who want to become active Wikipedia contributors. I was one, for a couple years (cue the “I got better”); judging from my personal experience, most of their advice is pretty good, save for item four:

Wikipedia is not primarily aimed at experts; therefore, the level of technical detail in its articles must be balanced against the ability of non-experts to understand those details. When contributing scientific content, imagine you have been tasked with writing a comprehensive scientific review for a high school audience. It can be surprisingly challenging explaining complex ideas in an accessible, jargon-free manner. But it is worth the perseverance. You will reap the benefits when it comes to writing your next manuscript or teaching an undergraduate class.

Whether Wikipedia as a whole is “primarily aimed at experts” or not is irrelevant for the scientist wishing to edit the article on a particular technical subject. Plenty of articles — e.g., Kerr/CFT correspondence or Zamolodchikov c-theorem — have vanishingly little relevance to a “high school audience.” Even advanced-placement high-school physics doesn’t introduce quantum field theory, let alone renormalization-group methods, centrally extended Virasoro algebras and the current frontiers of gauge/gravity duality research. Popularizing these topics may be possible, although even the basic ideas like critical points and universality have been surprisingly poorly served in that department so far. While it’s pretty darn evident for these examples, the same problem holds true more generally. If you do try to set about that task, the sheer amount of new invention necessary — the cooking-up of new analogies and metaphors, the construction of new simplifications and toy examples, etc. — will run you slap-bang into Wikipedia’s No Original Research policy.

Even reducing a topic from the graduate to the undergraduate level can be a highly nontrivial task. (I was a beta-tester for Zwiebach’s First Course in String Theory, so I would know.) And, writing for undergrads who already have Maxwell and Schrödinger Equations under their belts is not at all the same as writing for high-school juniors (or for your poor, long-suffering parents who’ve long since given up asking what you learned in school today). Why not try that sort of thing out on another platform first, like a personal blog, and then port it over to Wikipedia after receiving feedback? Citing your own work in the third person, or better yet recruiting other editors to help you adapt your content, is much more in accord with the letter and with the spirit of Wikipedia policy, than is inventing de novo great globs of pop science.

Popularization is hard. When you make a serious effort at it, let yourself get some credit.

Know Thy Audience, indeed: sometimes, your reader won’t be a high-school sophomore looking for homework help, but is much more likely to be a fellow researcher checking to see where the minus signs go in a particular equation, or a graduate student looking to catch up on the historical highlights of their lab group’s research topic. Vulgarized vagueness helps the latter readers not at all, and gives the former only a gentle illusion of learning. Precalculus students would benefit more if we professional science people worked on making articles like Trigonometric functions truly excellent than if we puttered around making up borderline Original Research about our own abstruse pet projects.