Alleged intellectual Christina Hoff Sommers (I know, I know, it’s bad form to give away the punchline of a joke so early) recently had this to say:

Dear liberals, When you side with today’s 3rd wave intersectional feminism, you are siding with the intellectual equivalent of creationism.

As a liberal feminist whose day job actually is studying evolutionary dynamics, I can only say this: 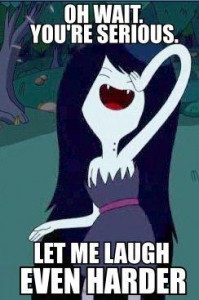 Reading what people write as they try to cope with the assault on our common humanity known as Fifty Shades of Grey is weirdly addictive. Midway through one recap/critique, I realized that given the “hero’s” character, this “love story for the ages” would honestly have ended a few chapters in, and very badly. Then I realized just what TV show Christian Grey—rich, arrogant, with an opinion of his own intelligence far exceeding the evidence—would have been a murderer on.

Grey said, “The officer outside said it looks like an accident.”

“Yes, well, any time a person dies not under a doctor’s care, my department gets involved. Usually it just comes down to paperwork. Always the report, we have to file.”

“And she had just graduated college, you say? Such a shame. A lovely, bright young woman like that. She had her whole life ahead of her. I hardly knew her, but I can’t help… Such a tragedy, and so unfair.”

“It never is fair, sir, you’re right about that.”

“If you don’t need me any longer, Lieutenant, I’ll be on my way. You can reach me through my office.”

“Oh, I think we’re about done here. We’ll give you a call if anything turns up.”

In re: Time magazine’s poll of words which are, like, grody to the max

OK, let’s give Steinmetz a big heaping dollop of benefit-of-the-doubt. Suppose you really are just exasperated by celebrities being, you know, celebrities in interviews. Sure. Fine. Then shouldn’t you direct your ire to the media apparatus which persists in caring about what celebrities do and say, regardless of what they are actually good at? If “media trends” are your problem, why don’t you criticize, I dunno, the media?

“Words to ban” pieces, like their year-in-review cousins, are perfect candidates to be granfalloons of petty grievances. They are also ideal capsules of public shaming in the interests of orthodoxy.

Language is all bound up with emotion, sometimes trying to fill an emotional need with pure verbal art. Larry Gonick‘s example was promoting someone to “vice president”, instead of giving her a raise. “A switchboard operator no longer, you are now Vice President, Corporate Communication!” Here, the policing of vocabulary gives people who don’t have a lot of power themselves the ability to stomp on those with even less. Sometimes, word rage is a way of punching up: e.g., getting one back from the executive class by condemning manager-speak. People who insist “impact is not a verb” come across, to me anyway, like they’ve heard it too many times in vacuous babble from middle management (cf. “think outside the box!”). But a lot of word rage is punching down. When a usage is commonplace, people grow accustomed to it, and complaining about it becomes a niche pursuit of peeve-ologists. But when it’s an idiom spoken by Those Other People, it’s common enough to be noticed, but it doesn’t become familiar. It’s how Those Other People talk, and distaste for Those Other People gains a convenient and superficially polite outlet, in disparaging their vernacular.

Dawkins claims that Hölldobler has “no truck with group selection”. Wilson and Hölldobler (2005) proposes, in the first sentence of its abstract, that “group selection is the strong binding force in eusocial evolution”. Later, Hölldobler (with Reeve) voiced support for the “trait-group selection and individual selection/inclusive fitness models are interconvertible” attitude. Hölldobler’s book with Wilson, The Superorganism: The Beauty, Elegance, and Strangeness of Insect Societies (2008), maintains this tone. Quoting from page 35:

It is important to keep in mind that mathematical gene-selectionist (inclusive fitness) models can be translated into multilevel selection models and vice versa. As Lee Dugatkin, Kern Reeve, and several others have demonstrated, the underlying mathematics is exactly the same; it merely takes the same cake and cuts it at different angles. Personal and kin components are distinguished in inclusive fitness theory; within-group and between-group components are distinguished in group selection theory. One can travel back and forth between these theories with the point of entry chosen according to the problem being addressed.

This is itself a curtailed perspective, whose validity is restricted to a narrow class of implementations of the “multilevel selection” idea. (Yeah, the terminology in this corner of science is rather confused, which doesn’t make talking about it easier.) Regardless, I cannot think of a way in which this can be construed as having “no truck with group selection”. The statement “method A is no better or worse than method B” is a far cry from “method A is worthless and only method B is genuinely scientific”.

If Dawkins has some personal information to which the published record is not privy, that’s fine, but even if that were the case, his statements could not be taken as a fair telling of the story.

EDIT TO ADD (21 November 2014): I forgot this 2010 solo-author piece by Hölldobler, in a perspective printed in Social Behaviour: Genes, Ecology and Evolution (T. Székely et al., eds). Quoting from page 127:

I was, and continue to be, intrigued by the universal observation that wherever social life in groups evolved on this planet, we encounter (with only a few exceptions) a striking correlation: the more tightly organized within-group cooperation and cohesion, the stronger the between-group discrimination and hostility. Ants, again, are excellent model systems for studying the transition from primitive eusocial systems, characterized by considerable within-group reproductive competition and conflict, and poorly developed reciprocal communication and cooperation, and little or no between-group competition, one one side, to the ultimate superorganisms (such as the gigantic colonies of the Atta leafcutter ants) with little or no within-group conflict, pronounced caste systems, elaborate division of labour, complex reciprocal communication, and intense between-group competition, on the other side (Hölldobler & Wilson 2008 [the book quoted above]).

In such advanced eusocial organisations the colony effectively becomes a main target of selection […] Selection therefore optimises caste demography, patterns of division of labour and communication systems at the colony level. For example, colonies that employ the most effective recruitment system to retrieve food, or that exhibit the most powerful colony defence against enemies and predators, will be able to raise the largest number of reproductive females and males each year and thus will have the greatest fitness within the population of colonies.

In times gone by, the word “nerd” was an insult.

Now, it refers to a set of people who can be simultaneously marketed to.

Which is obviously totes better.

Thought for the day:

Darth Vader being Luke’s father did not have to mean that Vader was Anakin Skywalker.
END_OF_DOCUMENT_TOKEN_TO_BE_REPLACED

An interesting essay from last month, by Fred Clark: “Phlebotinum, young-Earth creationism and the willing suspension of disbelief” (20 October 2014).

I think this analogy has something to it, but there’s also a point of contrast. A well-written phlebotinium story establishes the limitations of its fictitious technology, the rules by which it operates. Neither deflector shields nor transporters exist outside the story, but it’s well known that you can’t beam through the shields. Warp speed can only get you to the next star system so quickly. Go too fast for too long—warp 9.9 for more than seven minutes, let’s say—and your ship will break, and you will go no farther into space today.

By contrast, creationism flips from one standard to another, rewriting its own rules whenever convenient (or, rather, whenever it’s necessary to avoid an incovenience). Molecular biology is fine as long as it’s making pretty pictures of things “too complicated to evolve by chance!!!”, but as soon as it provides an explanation, out the door it goes. “Academic freedom” is the creationist rallying cry, as long as it’s creationists who are being cruelly un-freedom-ized (perhaps by the hateful demand that they actually get some science done).