David Mermin thanked me for finding a glitch in one of his papers. I can retire now, right?

The matter concerns “Hidden variables and the two theorems of John Bell” [Reviews of Modern Physics 65, 3 (1993), pp. 803–15]. Specifically, we turn our attention to Figure 4, the famous “Mermin pentagram,” reproduced below for convenience. 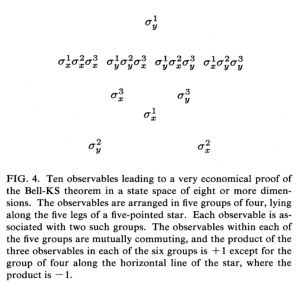 The caption to this figure reads as follows:

Glitches and goofs can happen to anybody. I’m embarrassingly prone to them myself. I also have the pesky kind of personality that is inclined to write in when I find them. This has led to a journal-article erratum once before, and now that I think about it, it provided the seeds for two papers of my own. As they say about Wolverine, being per-SNIKT-ety pays off!

(Incidentally, it took two months for this latest erratum to appear. A sensible system could have done it in as many days, but that’s scientific publishing for you.)

Now and then, I see someone mocking the idea of fanfiction—typically, “Tumblr fanfic” in particular. And it’s understandable. I mean, when the canonical material rises to such heights as, um, Batman V Superman, and Tumblr can only offer Martha Kent fighting off time-travelers who come back to kill young Clark, well, is there even really a choice to make? With the “Captain America is Hydra” story arc, Marvel provides readers with the innovative and unprecedented story of Bad Guys Use Space Thing To Make Big Good Guy Bad. Seriously, for sheer inventiveness and entertainment value, how could Tumblr or AO3 even compete?

Yes, fanfiction did give the world Christian Grey. But it also gave us Will Graham and Hannibal Lecter having Christian Grey for dinner, which has to count for something.

For previous installments of Daria Makes A Deal, see the chapter index. (For my research in quantum information theory, see my recap of recent publications.)

Fair warning: I got the Granada TV Sherlock Holmes series for Christmas and have been watching a lot of that lately.

Daria noticed herself climbing a rope up towards a treehouse.

“This is odd,” she said. “I shouldn’t have nearly the upper-body strength to be doing this so easily.” She took a good look at the knotted hemp rope.

Daria tried to work her memory backwards, to see if it offered any clues about her current situation. She recalled the fracas in the hotel lobby, and then Tom and Saavik were looking at her as though she were unwell, and she was telling them that she was just tired. She remembered thinking that she could pass off any odd behavior as due to her recent discovery of her own apparent bisexuality. Which sounded plausible enough. And so she had begged off, pleading the ineffectuality of caffeine, to hide in the room where she had awoken from her dream—

It had been only a dream, but that meant nothing at all.
END_OF_DOCUMENT_TOKEN_TO_BE_REPLACED