It’s been a while since I’ve felt riled enough to blog. But now, the spirit moves within me once more.

First, I encourage you to read Andrew Hacker’s op-ed in The New York Times, “Is Algebra Necessary?” Then, sample a few reactions:

I will try to gather a few observations here which I haven’t seen made elsewhere, for the most part.

Towards the end, Hacker’s reasoning gets just bizarre. He keeps emphasising how important “citizen statistics” is. I’m baffled as to how one could teach statistics in any useful way without the material he wants to throw out! Prerequisites: we needz them. “Is Algebra Necessary?” If you want to do statistics or economics, yes, it is.

Quantitative literacy clearly is useful in weighing all manner of public policies, from the Affordable Care Act, to the costs and benefits of environmental regulation, to the impact of climate change. Being able to detect and identify ideology at work behind the numbers is of obvious use. Ours is fast becoming a statistical age, which raises the bar for informed citizenship. What is needed is not textbook formulas but greater understanding of where various numbers come from, and what they actually convey.

OK, so how are we supposed to teach where “numbers come from” and “what they actually convey” when the students can’t manipulate algebraic formulas? That’s like expecting to raise a generation of musicians who’ve never practised a scale.

It’s also nice how he skips past the serious problems we have with infrastructure. You know, schools not being able to buy books any more, and teachers who feel they aren’t capable of teaching even middle-school mathematics—because they aren’t. But saying that teachers need to be trained and books must be bought doesn’t make you a daring iconoclast worthy of a New York Times soapbox, now, does it?

Hacker’s standard for what counts as advanced—and, therefore, unnecessary—mathematics seems to drift from algebra to calculus:

Medical schools like Harvard and Johns Hopkins demand calculus of all their applicants, even if it doesn’t figure in the clinical curriculum, let alone in subsequent practice.

Maybe because doctors need to understand clinical trials, which requires understanding statistics, which in turn requires calculus? (I’m looking at The Cartoon Guide to Statistics, on page 66. Yup, integral sign.) Hey, here’s a radical thought: maybe not enough doctors really get what’s going on with clinical trials, and we’d be better off if more of them knew slightly higher mathematics, instead of fewer?

Of course, in Hacker’s world, everyone knows what they want to be when they grow up, and nobody needs training for anything else in case they want or need to switch to a new job.

It’s not hard to understand why Caltech and M.I.T. want everyone to be proficient in mathematics. But it’s not easy to see why potential poets and philosophers face a lofty mathematics bar.

Philosophers don’t need to know mathematics? Not even mathematics which is hundreds or thousands of years old? What. The. Fuck? 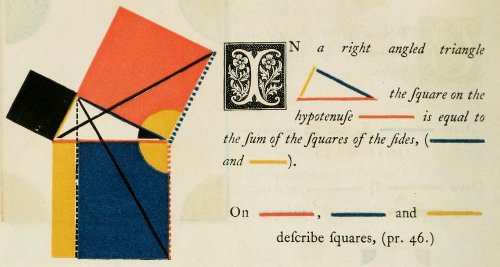 Oh, poor Euclid. Such a fate, and for you who alone have looked on beauty bare….

How many college graduates remember what Fermat’s dilemma was all about?

I’m guessing Hacker is referring to Fermat’s Last Theorem, but I don’t really know. (Nor does anyone else I know who read Hacker’s piece.) It doesn’t really fit the sense of “dilemma.” Fermat stated a problem and claimed that he had a solution. Perhaps the “dilemma” was that he felt compelled to write it down even though he didn’t have space to include his proof? Come on, I’m trying to be charitable here.

I might as well close with this bit from Hacker:

Yes, young people should learn to read and write and do long division, whether they want to or not. But there is no reason to force them to grasp vectorial angles and discontinuous functions.

So: the line is drawn wherever Hacker feels it should. Good to know. (I wonder: if long division is mandatory, what about, say, extracting square roots by hand? My mother learned how to do that in grade school, but I didn’t pick it up until I read the Feynman Lectures.) Incidentally, as a workaday scientist, I work with vectors and discontinuities far more often than I have to use long division. Honestly, I think “the line is broken in two pieces” is a significantly easier concept to get across than the rigmarole of pulling numbers down and multiplying them up and subtracting them down. But, of course, “vectorial angles” and “discontinuous functions” sound awfully intimidating to the proletariat, so let’s just hold them up as examples of what we don’t need to teach! 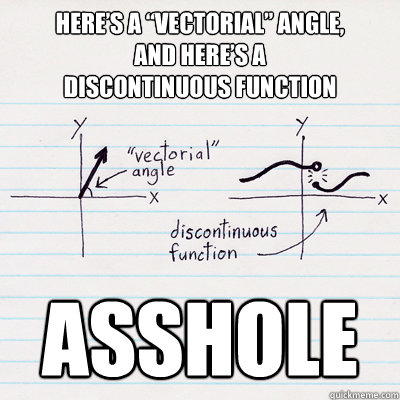 UPDATE (30 July 2012): I notice some people have been finding this blog entry by websearching for “Fermat’s dilemma,” so I figured I should say a bit more about that, following thoughts I developed on Twitter. As I said above, you could, if you really tried, interpret this odd choice of words as Hacker’s trying to be artful. But even if you try to read it that way, it’s sorry writing. In aiming to be evocative, Hacker just comes across ambiguous. You could say that Fermat’s little theorem—not to be confused with his Last Theorem!—embodies a dilemma. The little theorem gives us a test for saying whether a number is prime, but that test doesn’t always work: it can be fooled by a “pseudoprime.” Do we use a fallible test or not? We have a dilemma on our hands! Or, if that sounds like too much of a stretch, take the subject of probability theory, which Fermat and Blaise Pascal jumpstarted back in 1654. They wanted to answer a puzzle posed by Antoine Gombaud, Chevalier de Méré: how should two gamblers divvy up a pot of money if their game-playing is interrupted? Sorting out this kind of dilemma led Pascal and Fermat to probability theory.

See, we give things names in order to identify them, and if you make up your own names for things which already have them, you’re apt to confuse people. Sometimes, when the old terminology is muddled or unclear, a new turn of phrase is just what we need, but this is not one of those times. Hacker throws around big words like “polynomial functions and parametric equations” in order to make algebra sound intimidating, and when he makes up his own terms, he fumbles.

UPDATE (11 August 2012): Another item in the “oh, this is too fun” category. Hacker mocks the notion that being able to prove

can lead to “more credible political opinions or social analysis.” I didn’t say anything about that until now, because I figured the rejoinder was implicit in what I said up top: if you can’t say that

and then combine the two and so deduce

then actually learning or doing anything with “citizen statistics” will be beyond you. Them’s the breaks. However, there’s something else interesting here, which goes back to Hacker’s low expectations for poets and philosophers. To make things more clear, I’m going to replace $x^2$ with $a$ and $y^2$ with $b$. Then the Equation Mocked by Hacker becomes

If we divide both sides of this equation by 4, we get a restatement of it which is just as true:

And this is the algebraic statement of what Euclid said geometrically in Proposition II.5 of The Elements—which happens to be one of the oldest fragments of Euclid we have a surviving copy of. In fact, since this papyrus fragment was probably written between 75 and 125 CE, it’s likely older than any copy of any part of the Gospels. Rylands Library Papyrus P52, a scrap with a few verses from John 18, is the oldest one of those we’ve got, and it dates to about 125 CE itself.

It’s easy to say that not being willing to learn mathematics cuts one off from intellectual history. But damn, does Hacker ever put a point on it.

Congratulations, Professor Hacker. Your op-ed has earned a negative score on the Pritchard scale.

“Take the mathematical developments out of the history of science, and you suppress the skeleton which supported and kept together all the rest. Mathematics gives to science its innermost unity and cohesion, which can never be entirely replaced with props and buttresses or with roundabout connections, no matter how many of these may be introduced.”
—George Sarton, science historian