A few posts ago, I mentioned the model of network growth by preferential attachment. This is a big enough topic in network theory that it’s worth poking in detail. I discussed some of the subject’s history in this paper (1.2 Mb PDF, plus presentation), which they tell me passed some stage of review and will appear in the print volume of the conference proceedings, i.e., an overpriced Springer book nobody will actually buy. But in addition to learning the names and dates involved in the story, we would like to play around with the ideas ourselves.

The other day, I realized how easy this would be, and now that I’ve actually presented this to a classroom full of people, I’d like to write about it. Today, I’ll present a Python program for growing a network by the “rich get richer” effect known as preferential attachment.

This little tyke of a program will use two kinds of data structures: lists and dictionaries. A list is denoted by a set of comma-separated values enclosed in square brackets, thus:

Having built the list beatles in this way, we can manipulate it, for example by adding a fifth Beatle:

The contents of our list after executing this command would be ["john", "paul", "george", "ringo", "george martin"]. Another useful item we will employ is the len() function, which returns the length of a list. The initial value of len(beatles) would be 4, and after adding “george martin” the command

would output the number 5.

A dictionary is much like a list, except that its values are labeled by keys. For example,

The statement print songAuthors["i me mine"] would output the string george. For further details, see Guido van Rossum’s Python tutorial. Our representation of networks will follow that given in one of Guido’s essays: each node will be an item in a dictionary, and the value of that item will be a list of the other nodes to which it is connected.

Because scientists in general (and complex-systems people in particular) love pretty pictures, I’m going to include a feature for graphic output. Of the possible software implementations we could choose here, I’m picking SciPy (not to be confused with ScientificPython). Windows users can get SciPy and all the accessory packages bundled together by downloading Enthought Python. Linux users, or at least the Ubuntu and Debian people, can apt-get install the packages python-scipy and python-matplotlib. (You might as well grab python-scientific while you’re at it.) Mac people. . . er, try here; you should cruise by and pick up SciPy, NumPy and Matplotlib.

And, why not, a sample of the output: 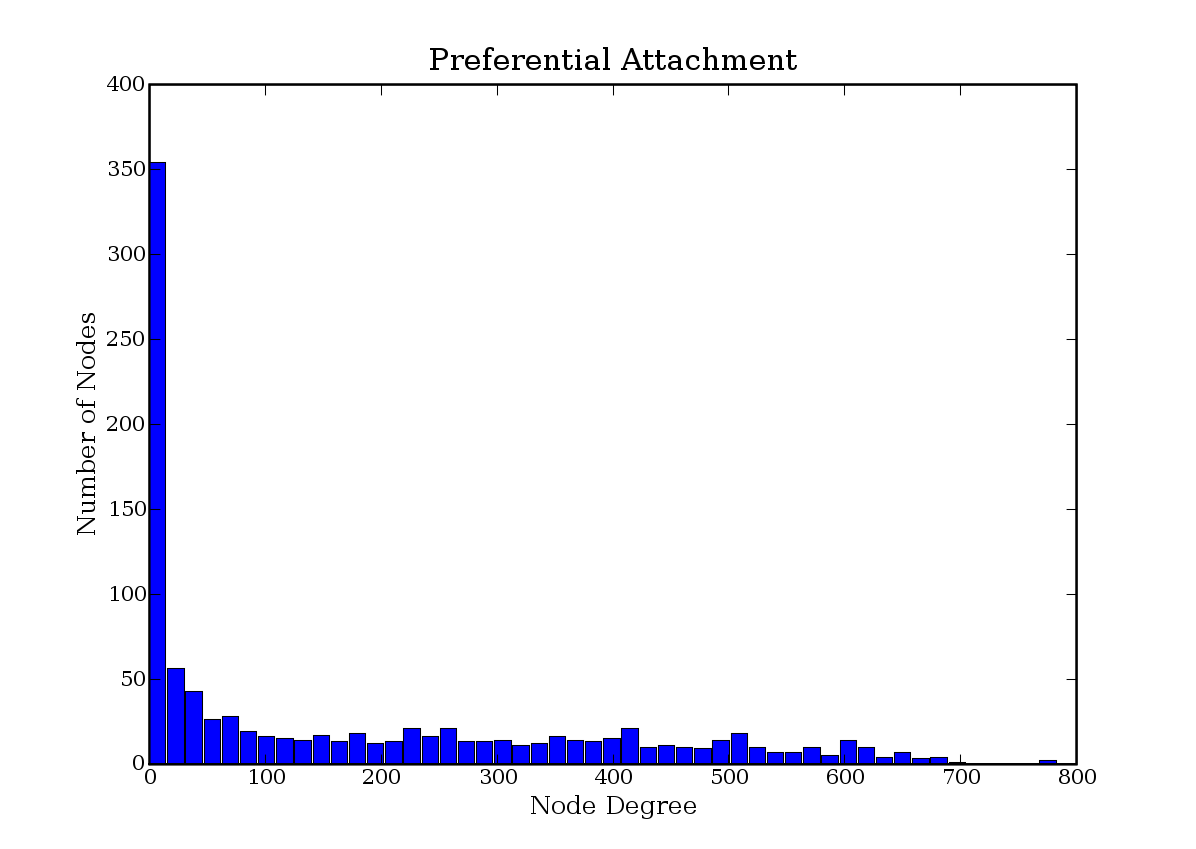 The only moderately tricky feature of the code (other than the external visual-output libraries) is the use of a "list comprehension" to calculate the node degrees. Even if you don't include the graphics part, printing out the list lDegrees should show you that there are a great many nodes with few connections and a smaller number of more heavily connected ones.

Characterizing the form of the degree distribution is left as an exercise to the interested reader. (Hint, hint.) Oh, all right, I might write about that soon, as well as addressing the topic of network visualization in more detail.

UPDATE (29 July 2007): Randall Farmer has ported this proglet to JavaScript.

4 thoughts on “Preferential Attachment in Python”