Can physics tell us about ourselves?

To phrase the question more narrowly: can the statistical tools which physicists have developed to understand the collective motion of large agglutinations of particles help us figure out what our brains are doing?

If Jack Cowan and his colleagues are correct, ideas from statistical physics can tell us important facts about our own brains. By studying the recurring motifs of hallucinations, we can construct a geometry of the mind. 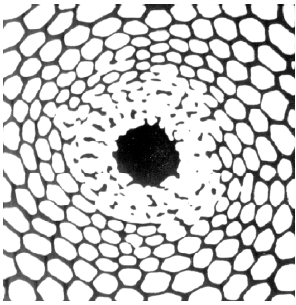 “Honeycomb” form constant,
from Bresloff, Cowan et al. (2002)It’s hard to imagine any sort of regularity in a phenomenon as eccentric as visual hallucinations. Our culture is brimming with psychedelia, music and art produced “under the influence” of one or another infamous chemical. Yet the very fact that we can label artwork as “psychedelic” suggests that the effects of those mind-bending substances have a certain predictability. In the 1920s, long before the days of review boards and modern regulations for human experimentation, the neurologist Heinrich KlÃ¼wer ingested mescaline and recorded his observations. He reported visual hallucinations of four distinct types, which he called “form constants.” These form constants included tunnels and funnels, spirals, honeycomb-like lattices and cobweb patterns. Similar structures have been reported with other drugs, like LSD; these same form constants also appear during migraines, in “hypnogogic” (falling asleep) and “hypnopompic” (waking up) states, when pressure is applied to closed eyes, and even in ancient cave paintings.

If the same hallucinatory images appear from many causes, might they be indicative of some more general property of brain structure?

In the late 1970s, Cowan began to suspect that the culprit was not mescaline or LSD itself, but rather the visual cortex at the back of the brain, and in particular the section known as the primary visual cortex, V1. From magnetic-resonance imaging studies, we know that V1 becomes active when a subject is asked to examine closely an image presented to the eyes. Neuroscientists have discovered a great deal about V1; we know, for example, that its cells are organized into columns, perpendicular to the cortical surface, which are about a millimeter wide (the exact size varies among different mammal species). However, Cowan realized, to a decent first approximation, the visual cortex could be treated mathematically as a uniform surface, essentially a flat plane.

What patterns of activity would arise when this patch of brain-stuff is perturbed by some outside influence? The answer lies in V1’s symmetry: no matter where you stand over it, it looks roughly the same. Shift (or translate) it left or right, and it appears unchanged. To a mathematician, this approximate “translational symmetry” carries a direct implication: the natural patterns or “eigenmodes” of neural activity moving across the cortex will be plane waves.

Imagine a wave whose crest is a straight line, rippling placidly across a tank of water. The situation in V1 is much the same, except that instead of the displacement of water, the quantity of interest is the neural activity at a given point. In physics jargon, the set of all points and their associated neural firing rates constitutes a
field, and the variation over time of that field is tractable via the tools of field theory.

The relationship between the eyes and the visual cortex is an interesting one, with significant ramifications. It is not the case that, if a square is projected onto the retina, the cortical columns in V1 will “light up” in a square pattern, like the image from a camera being reproduced on a television screen. Instead, a more sophisticated “mapping” exists between our field of view and our primary visual cortex, a relationship known as a complex logarithmic map. A complex logarithm turns circles into straight lines, for example, so that if we stare at a light circle on a dark background, a straight line of neural activity will cut across V1. (If two lines meet at an angle, a complex logarithmic map will turn them into two other lines meeting at the same relative angle. This is a type of conformal map, which preserves angles locally but distorts shapes at larger scales.) 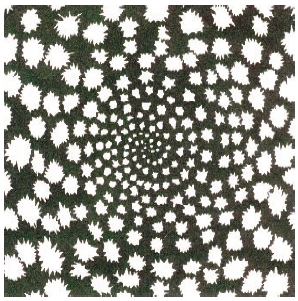 “Spiral” form constant provoked by LSD,
from Bresloff, Cowan et al. (2002)The logical question is then, what images seen by the eyes correspond to the eigenmodes characteristic of the perturbed V1? What would you have to see for the ordinary activity of V1 to look like the patterns seen when the brain is perturbed by a migraine or a drug?

The answer is that the eigenmodes of this simple model correspond to two of KlÃ¼ver’s form constants.

Now, the visual cortex is not a perfectly uniform, completely symmetric surface. For starters, the cortex can recognize orientation: patches of cortex have a sense of directionality, such that a particular small piece of cortex will become active when its region of the visual field contains a feature tilted at a certain angle. (In the macaque, for example, these “iso-orientation patches” are about 0.7 mm across, the width of a mechanical pencil point.) When this feature is added to the cortex model, the other two form constants emerge from the equations. Shapes seen in hallucinations arise naturally from the symmetries of V1.

I had the good fortune to see Jack Cowan explain this research in person, although on that day, the emphasis was on other ways the model could be tested — using EEG measurements and so forth — rather than on hallucinations provoked by the 1960s. (For that, the reader can watch the video from California.) A complex-systems expert who sat next to me in the audience opined that Cowan had “averaged out the neuroscience” in the first few minutes of his presentation: this model of the cortex omits almost all of the detailed biochemical knowledge we have on neurons. This is at once the blessing and the bane of such research. If a “toy model” exhibits behavior which resembles that of the real, living system, then we can provisionally neglect the intricacies of detail; features in EEG traces or visual hallucinations which occur on top of the toy model’s predictions might then be due to those biological peculiarities.

Those who wish to brave the mathematical details can read the literature:

In upcoming posts, I will try to explore those details, placing this research in a broader context and illuminating its mathematical connections to Turing morphogens, string theory and other subjects.

6 thoughts on “Physics on the Brain, Part 1”