Now and then, stories will pop up in the news about the latest hot new thing in quantum computers. If the story makes any attempt to explain why quantum computing is special or interesting, it often recycles a remark along the lines of, “A quantum bit can be both 0 and 1 simultaneously.” This, well, ehhhhh… It’s rather like saying that Boston is at both the North Pole and the South Pole simultaneously. Something important has been lost. I figured I should take a stab at explaining what. Our goal today is to develop a mental picture for a qubit, the basic unit that quantum computers are typically regarded as built out of. To be more precise, we will develop a mental picture for the mathematics of a qubit, not for how to implement one in the lab. There are many ways to do so, and getting into the details of any one method would, for our purposes today, be a distraction. Instead, we will be brave and face the issue on a more abstract level.

A qubit is a thing that one prepares and that one measures. The mathematics of quantum theory tells us how to represent these actions algebraically. That is, it describes the set of all possible preparations, the set of all possible measurements, and how to compute the probability of getting a particular result from a chosen measurement given a particular preparation. To do something interesting, one would typically work with multiple qubits together, but we will start with a single one. And we will begin with the simplest kind of measurement, the binary ones. A binary test has two possible outcomes, which we can represent as 0 or 1, “plus” or “minus”, “ping” and “pong”, et cetera. In the lab, this could be sending an ion through a magnetic field and registering whether it swerved up or down; or, it could be sending a blip of light through a polarizing filter turned at a certain angle and registering whether there is or is not a flash. Or any of many other possibilities! The important thing is that there are two outcomes that we can clearly distinguish from each other.

To specify the preparation of a single qubit, all we have to do is pick a value for $x$, a value for $y$ and a value for $z$. But not all combinations $(x,y,z)$ are physically allowed. The valid preparations are those for which the point $(x,y,z)$ lies on or inside the ball of radius 1 centered at the origin: $$ x^2 + y^2 + z^2 \leq 1. $$ We call this the Bloch ball, after the physicist Felix Bloch (1905–1983). The surface of the Bloch ball, at the distance exactly 1 from the origin, is the Bloch sphere. The points where the axes intersect the Bloch sphere — $(1,0,0)$, $(-1,0,0)$, $(0,1,0)$ and so forth — are the preparations where we are perfectly confident in the outcome of one of our three tests. Points in the interior of the ball, not on the surface, imply uncertainty about the outcomes of all three tests. But look what happens: If I am perfectly confident of what will happen should I choose to do an $X$ test, then my expected values $y$ and $z$ must both be zero, meaning that I am completely uncertain about what might happen should I choose to do either a $Y$ test or a $Z$ test. There is an inevitable tradeoff between levels of uncertainty, baked into the shape of the theory itself. One might even call that a matter… of principle. 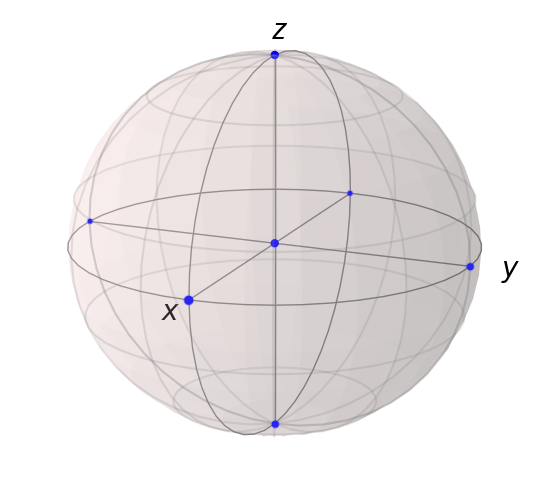 We are now well-poised to improve upon the language in the news stories. The point that specifies the preparation of a qubit can be at the North Pole $(0,0,1)$, the South Pole $(0,0,-1)$, or anywhere in the ball between them. We have a whole continuum of ways to be intermediate between completely confident that the $Z$ test will yield $+1$ (all the way north) and completely confident that it will yield $-1$ (all the way south).

Now, there are other things one can do to a qubit. For starters, there are other binary measurements beyond just the $X$, $Y$ and $Z$ tests. Any pair of points exactly opposite each other on the Bloch sphere define a test, with each point standing for an outcome. The closer the preparation point is to an outcome point, the more probable that outcome. To be more specific, let’s write the preparation point as $(x,y,z)$ and the outcome point as $(x’,y’,z’)$. Then the probability of getting that outcome given that preparation is $$ P = \frac{1}{2}(1 + x x’ + y y’ + z z’). $$

An interesting conceptual thing has happened here. We have encoded the preparation of a qubit by a set of expected values, i.e., a set of probabilities. Consequently, all those late-night jazz-cigarette arguments over what probability means will spill over into the arguments about what quantum mechanics means. Moreover, and not unrelatedly, we can ask, “Why three probabilities? Why is it the Bloch sphere, instead of the Bloch disc or the Bloch hypersphere?” It would be perfectly legitimate, mathematically, to require probabilities for only two tests in order to specify a preparation point, or to require more than three. That would not be quantum mechanics; the fact that three coordinates are needed to nail down the preparation of the simplest possible system is a structural fact of quantum theory. But is there a deeper truth from which that can be deduced?

One could go in multiple directions from here: What about tests with more than two outcomes? Systems composed of more than one qubit? Very quickly, the structures involved become more difficult to visualize, and familiarity with linear algebra — eigenvectors, eigenvalues and their friends — becomes a prerequisite. People have also tried a variety of approaches to understand what quantum theory might be derivable from. Any of those topics could justify something in between a blog post and a lifetime of study.