One of my Christmas gifts this year was Peter Irons’ God on Trial (2007), a rollicking account of courtroom clashes about religious influence in the public sphere. Irons, you may recall, was a dry-humored champion of justice in the Stuart Pivar affair, and these days, he’s been doing a little gumshoe work to uncover cdesign proponentsist shenanigans with regard to copyright violations. This is a pretty tangled business, and it probably won’t escalate into the next Dover trial, but it does have its amusing aspects.

For example, known pseudoscientist William Dembski has been complaining to his lawyer that Irons just won’t shut up with the pesky honesty. To hear poor li’l Dembski tell it, he just can’t go a single day without some e-mail from Irons, pestering him about academic integrity and intellectual property. This part caught my eye:

Moreover, I’m not particularly happy that Irons sends them from the UCSD server, which my tax dollars are indirectly supporting.

Gee, I wonder if Dembski is going to stop paying his taxes, given that during the 2007 fiscal year, the National Science Foundation was appropriated $5.9 billion dollars, and all those half-a-trillion pennies went to support actual science instead of Intelligent Design. Now, this isn’t very much of his withholding tax, since the NSF’s slice came out of a $463.5-billion pie (called H.J.Res.20), but it’s still enough to make him yowl like a wet LOLcat: “Noooo! They be takin mah taxez! Do not want!”

UPDATE (28 December): In the comments, Courtney posts a link to a new LOLDembski: 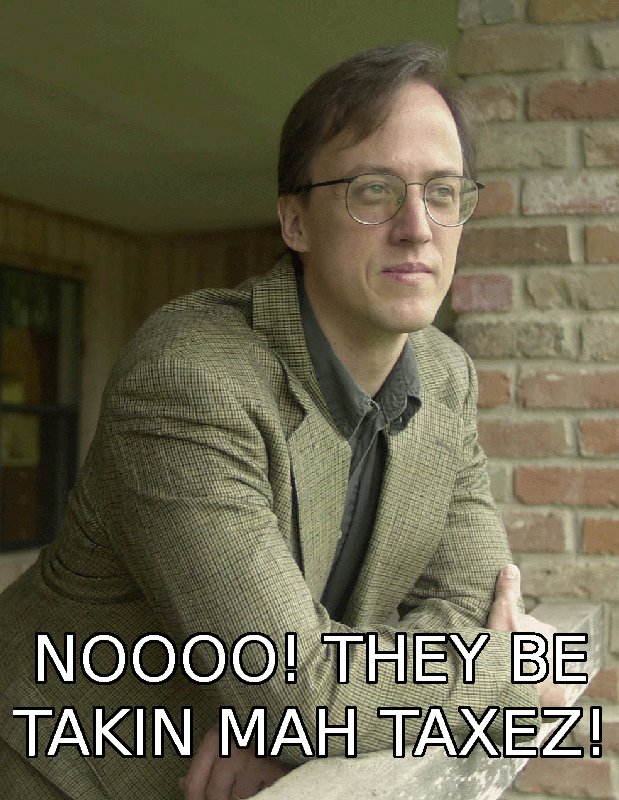