Both Joshua and I found ourselves passing by the Anonymous people protesting the Church of Scientology today: 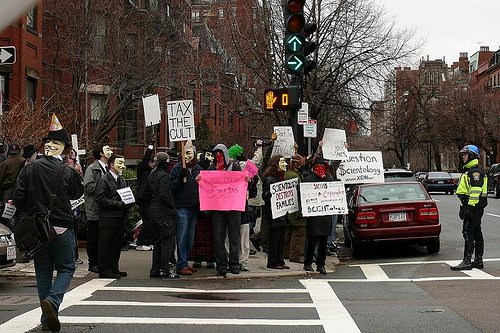 At a rough estimate, there were probably a little over a hundred people present at noon — pretty good turnout for a Stand Alone Complex. (And I’ll have you know I thought of that comparison independently.) As Joshua says,

The main impression I had was that they were really well-organised and on-message for a bunch of random, anonymous internet people. There was a fair amount of meme-shouting, but the dominant chant was â€œTAX THE CULTâ€, and most of the signs reflected that theme and/or pointed people to xenu.net for more information.

The “Honk if you oppose $cientology” signs got some good responses from the drivers passing along Beacon Street, as did the “CoS [heart] Yankees” sign which came out later. I noticed that the honking went in clusters: if one car honked, the ones immediately following it (in a clump formed by the traffic lights, say) were more likely to make noise themselves.

The Anonymous were also being very mindful of non-protesters. Someone would always shout â€œClear the sidewalk!â€ when pedestrians were coming, and they redirected some poor, lost drivers who tried to turn the wrong way onto Beacon Street. (Mainly by shouting â€œEPIC FAIL!â€ at them while waving them in the right direction.)

This sounds, more or less, like what was going on when I hung around.

The police did stop one car which made a slow turn from Hereford onto Beacon, honking all the while (the people inside were wearing Guy Fawkes masks and taking pictures of the crowd on the sidewalks). I was at the wrong angle and had too many protesters between myself and the stopped car to see what happened, although the people standing near me were making wry smalltalk: “Somebody’s license plate has just been photographed. Guess who’s Fair Game now?” and so forth.

Anon617 has some photos of the event, as do Dizzyjosh and Greybolt.

4 thoughts on “Excuse Me, We’re From the Net”