It’s time to take the names of human actions in vain! The following post will contain the sort of language which, if you cared, would have made you stop reading my website already. Consider this item from sportswriter John Donovan:

Joe Torre met with George Steinbrenner for a nice lunch in Tampa the other day, and I’m sure at some point the subject probably turned to the Yankees. And George, I’d bet, at some point looked at his manager and said, “#$!&@* the heck?” The Yanks should be better. Can they win some close games?

Now, I don’t really give a flying $!%!#% about sports, unless there’s a chance that Boston will erupt in a riot. Then, I’m interested. However, linguistic peculiarities always get me perked up. Let’s look at that “#$!&@* the heck?” little remark. Everyone who grew up with comic strips knows about the convention of replacing swear words with punctuation symbols. Sometimes, the word being replaced is obvious to those familiar with modern slang; on other occasions, there’s a moderate ambiguity in the decoding. More unusual, however, is the case of an innocent word being obscured. Following comics convention, one would expect to see “What the #$!&@*,” but that’s not what we’ve got here. So, presumably, the proper decoding for Donovan’s remark would have to be. . . .

As Robert Hay reports to the linguist Arnold Zwicky, “fuck the heck” has become a standard expression of bewilderment on the site firejoemorgan.com, which ridicules bad sports journalism, and which noticed the Donovan remark in question. 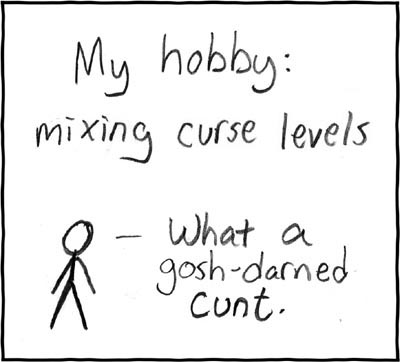 Incidentally, Zwicky also notes that the = character doesn’t get used as an obscenicon very often. My first guess — take it for what little it’s worth — would be that it’s (a) not produced by holding down Shift on a normal QWERTY keyboard, and (b) far on the right-hand side of its row. Thus, it’s not likely to appear when a typist holds down Shift and strikes random keys. I’d be interested in hearing other hypotheses.