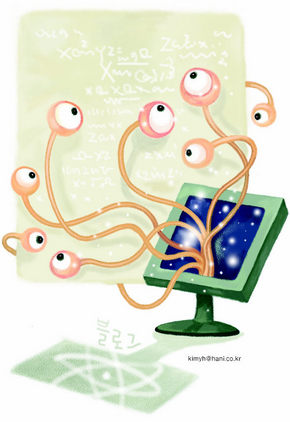 The story so far:

As January gave way to February, several bloggers called attention to a puzzling review article in the journal Proteomics, available online and slated for publication in the paper version. Mohamad Warda and Jin Han’s paper was entitled, “Mitochondria, the missing link between body and soul: Proteomic prospective evidence.” As PubMed and Proteomics now note, that paper has been retracted, but not, surprisingly, because it offered no actual evidence for its stated claim — that some grandfalutin’ higher power had been at work inside mitochondria, designing the ways their proteins worked together. Instead, the paper was retracted due to “substantial overlap of the content of this article with previously published articles in other journals” — in plain language, plagiarism.

The story is still unfolding. What concerns the scientific community now is not so much the transparently flawed allegations of Warda and Han themselves, but the sloppy practice of the journal Proteomics in letting those claims get through peer review into publication. Now, nobody expects peer review to be perfect — like any human institution, it’s not going to be — it’s just a procedure for telling, as Cosma Shalizi says, that “a paper is not obviously wrong, not obviously redundant and not obviously boring.” Still, this incident is rather beyond the pale.

While the Warda and Han paper was itself obviously wrong, the developments from it have been far from boring. The Korean newspaper The Hankyoreh picked up the story, and in consequence machine translation gave us the delightful phrase, “OK, the power of science blog!” More recently, Fabienne Gallaire wrote it up in the French publication Rue89. Gallaire’s piece describes how these shenanigans have played out, from the beginning until now. Of particular interest is its accurate description of how the plagiarism was first discovered:

A year in France did my French less good than one might imagine: thanks to American scientific hegemony, several of my classes were in English, and my fellow physics students preferred to practice their Americanese on me rather than being testbeds for my French. Much of the experience I did get came from ordering dinner at the local kebab joints, but for what it’s worth, my translation goes like this:

On the other hand, surfers of the Internet speak easily. Two hours after this critique had been put online, one of them remarked that the difference in style between the technical portions and the more theological portions suggested a plagiarism. Another two hours, and the first instance of plagiarism had been identified: a whole paragraph, copied word-for-word.

Less than 24 hours after the publication of Prof. Myers’s analysis, after a trial of formidable exhaustiveness, commenters showed that at least 20% of the fifteen-page article is a collection of passages pulled from a half-dozen articles not credited in the list of references.

Indignant letters were sent to the authors of the article and the managers of the journal, as well as the victims looted by these inappropriate “copy-and-paste” actions. The next day, Proteomics announced the withdrawal of the incriminated article due to “substantial overlap of the content of this article with previously published articles”. Thus, it will not appear in the paper version.

Warda and Han wrote that a “mighty creator” tinkered with mitochondria; Rue89 translates this phrase as “puissant CrÃ©ateur.” It is my solemn duty to report that at least two people read this as “pissant Creator.” I, of course, am above such behavior. . . .

“Avoir la langue bien pendue” is apparently an idiom meaning to speak with ease or facility; literally, it means to have a well-hung tongue.

4 thoughts on “Warda/Han and Well-Hung Tongues”