Online polls are not scientific. To state the matter more precisely, a poll on a website which is open to the entire Network and has only minimal measures to guard against repeat voting measures the people who were motivated to respond, not a representative sample of the population. Of course, it’s just like a creationist — beg pardon, a cdesign proponentsist — to rely upon a pseudoscientific tool for spurious validation of his pre-established beliefs. It is also in the nature of things that, on the Network, such attempts will backfire.

To wit, consider the poll on the Expelled! movie‘s MySpace page. The question was asked, “Do you think the theory of Intelligent Design should be taught in our education system?” The Evil Darwinismistic Conspiracy was alerted to the poll at 10:36 AM Eastern Time, and less than five hours later, this is where the results stand: 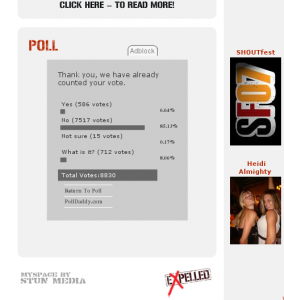 586 respondents have answered “Yes,” against 7517 saying “No” and 712 asking “What is it?” The third category has also been boosted by repressive, scientism-boosting conspirators, for added LOL value.

5 thoughts on “Basing Hopes on Pseudoscience”