Richard Dawkins and PZ Myers had a lengthy, informal chat during the 2008 American Atheists conference in Minneapolis, and a recording of their conversation is now available on DVD and in the video tubes. They discuss the fight against pseudoscience as well as several interesting topics in good science.

I did my best to summarize the kin-vs.-group business in this book review. Among the “glimmerings” which suggest there’s a better way to think about some evolutionary processes (name for that better way still to be defined) are, I think, the epidemiological simulations in which fitness of a genotype is clearly a function of ecology and thus strongly time-dependent, and consequently existing analysis techniques are likely to fail. Assuming this kind of thing happens in the real world, it might be better to speak of “extending the evolutionary stable strategies concept” or “temporally extended phenotypes” than to have yet another largely semantic argument over “group selection.”

When Dawkins spoke at the first artificial life conference in Los Alamos, New Mexico, in 1987, he delivered a paper on “The Evolution of Evolvability.” This essay argues that evolvability is a trait that can be (and has been) selected for in evolution. The ability to be genetically responsive to the environment through such a mechanism as, say, sex, has an enormous impact on one’s evolutionary fitness. Dawkins’s paper has become essential reading in the artificial life community.

Anyway, on with the show.

P-Zed wrote an introduction to allometry a little over a year ago.


Let’s see, P-Zed reviewed Dowd’s book here, and back in 2000, Russell Blackford wrote up a take on NOMA which is pretty much what Dawkins and Myers are saying here.

William Dembski was the one who said, “Intelligent design is just the Logos theology of John’s Gospel restated in the idiom of information theory.” He has also declared, “So, too, Christology tells us that the conceptual soundness of a scientific theory cannot be maintained apart from Christ.” (That’s from his 1999 book Intelligent Design: The Bridge between Science and Theology.) Michael Behe admitted that ID is religious both in Time magazine and on The Colbert Report.

Avalos has some interesting points on the “two-face” issue.

I’m not sure I care to hear Dawkins and Myers casting aspersions on quantum feminism.

Ooh, wow — this is the prelude to the Theatre Incident! History, extremely funny history, is about to be made. This is “Sabot Day,” the day commemorated forevermore with a ceremony

where we all dress up as Dawkins to go see this movie at the local art-house theatre, and leave a token, sacrificial friend dressed up as a squid outside where they play with their Mac.

The propaganda flick Expelled has turned out to be, well, rather a flop. Oh, and it was later found that Expelled did not use the XVIVO footage itself but rather an astonishingly plagiaristic rip-off. 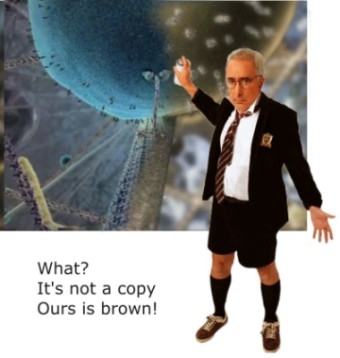 The legal dispute over this seems to have petered out, but with Expelled being a box-office disaster anyway, maybe we just shouldn’t care. OK, on with the programme.

On the subject of changing one’s mind after being questioned, see here.

Let’s see, P-Zed has a treatment of choanoflagellates and several segments on, er, segmentation, in Drosophila as well as in vertebrates.

It’s very interesting that we might have to talk about “the selfish regulatory gene” or “the selfish set-of-spliced-together-exons” or perhaps even “the selfish epigene.”

8 thoughts on “The Strident and The Shrill”