Our goal in this series is the solution of the hydrogen atom using the methods of supersymmetric quantum mechanics. Last time, we constructed the following picture of the procedure:

If the potential we wish to study satisfies a certain criterion, which we called “shape invariance,” we can construct a hierarchy of Hamiltonians, each missing the lowest-energy eigenstate of the last, and find the complete spectrum of the original Hamiltonian by “working leftward” in the state diagram. We shall see that with the hydrogen atom, each state in the diagram corresponds to a physical eigenstate of the system, but in order to get there, we have to turn the three-dimensional Coulomb potential of the hydrogen atom into the kind of problem we can study with the SUSY QM machinery we’ve built up so far. Two steps will be necessary to do this: first, moving to the center-of-mass reference frame, and second, separating the radial and angular dependencies. In this post, we’ll tackle the first of those two tasks.

While the SUSY part isn’t widely taught, these preliminary steps are more familiar. This brief note is based on Chapter VII of Cohen-Tannoudji, Diu and Laloë.
END_OF_DOCUMENT_TOKEN_TO_BE_REPLACED

Canadian journalist and cdesign proponentsist Denyse O’Leary has given us nine “predictions” supposedly derived from Intelligent Design. As a public service, I summarize for the busy reader:

One day, Intelligent Design will bring me a pony.

The best part is that the original question was if cdesign proponentsists had made any predictions which have already been confirmed by experiment.

Jorge Luis Borges once wrote, in a 1960 essay called “Mutations,”

In a hallway I saw a sign with an arrow pointing the way, and I was struck by the thought that that inoffensive symbol had once been a thing of iron, an inexorable, mortal projectile that had penetrated the flesh of men and lions and clouded the sun of Thermopylae and bequeathed to Harald Sigurdson, for all time, six feet of English earth.

This line came to mind when, a few years ago, I had to write a poem for a poetry workshop class. Looking back, it was the easiest course credit I ever got.
END_OF_DOCUMENT_TOKEN_TO_BE_REPLACED

The Gentle Reader may have noticed a notice at the foot of the discussions on this site, saying something like “Comments for this post will be closed on 22 March 2008.” This is a new anti-spam measure, implemented with Comment Timeout and intended to keep my Akismet spam bucket from filling up six pages overnight. Discussions will be closed after about sixty days of inactivity (I will probably tweak the figures when I feel like procrastinating and have exhausted the potential of changing my desktop background image). So far, closing the older discussions has cut my spam intake by, roughly estimating, an order of magnitude, which makes me pretty happy.

I have more to read, write and process than I can handle right now, and something will have to be sacrificed. Consequently, Sunclipse is going on hiatus until next week. I leave you today (imagine my Charles Kuralt voice speaking these words) with this thought-provoking quotation from presidential candidate Mike Huckabee:

We study the effect of clustering on the organization of cooperation, by analyzing the evolutionary dynamics of the Prisoner’s Dilemma on scale-free networks with a tunable value of clustering. We find that a high value of the clustering coefficient produces an overall enhancement of cooperation in the network, even for a very high temptation to defect. On the other hand, high clustering homogenizes the process of invasion of degree classes by defectors, decreasing the chances of survival of low densities of cooperator strategists in the network.

Suddenly, with regard to cooperation issues, I have gone from [tex]N[/tex] papers behind to [tex]N + 1[/tex] papers behind. Question: If we construct a time-dependent network model of a population, can we represent both kin recognition and the effect of spatial distribution by node clustering?

The Open Laboratory: The Best Science Writing on Blogs 2007 is now finished and up for sale. If you find any mistakes in the anthology, you can blame me, since I was a judge and was therefore responsible for detecting any and all errors of fact, interpretation and punctuation.

There are only 1.27 times as many straight people as gay people in the world, and most people aren’t either.

How do I know? Google says so. Just count the hits.

Now that I’ve gotten Science After Sunclipse banned from every school room in America (oh, like it wasn’t already, me being an ill-tempered, illiterate evilutionist and all), you can just go about your business. Or you can hang around while Windy and I resolve the group selection controversy.

Via Quantized Thoughts comes the first album meme. The rules:

My title is Which We Created Them, since my quotation was, “The significant problems we have cannot be solved at the same level of thinking with which we created them,” attributed to Albert Einstein. My band name is KÃ¶prÃ¼lÃ¼ family: I’m triply heavy metal. Just call me osmium, biyotch.

The twenty-fourth Carnival of Mathematics is online at Ars Mathematica. To Ars, 24 is a special number because the Leech lattice lives in 24 dimensions (and, really, what could be creepier than a lattice of leeches? — methinks that could be the title for the sequel to The Halting Oracle). It’s also interesting to the secretive, cultish cabal of quantum gravity research, since it’s 26 (the critical dimension for bosonic string theory) minus 2 (the dimensionality of the string world-sheet). These two occurrences are actually related, although there’s a reason the relationship falls in a domain called Moonshine theory. . . .

As luck would have it, my day job will require me to teach a mini-class on writing computer simulations for scientific purposes next week, and one of the examples I thought I’d include turned out to be just the thing I needed to provide an illustration for the review of John Allen Paulos’ Irreligion (2007) I’ve got in the works. Since the details are a little beyond the scope of that review, I might as well make another post out of them.

This is a fifty-frame animation of Conway’s Game of Life which begins with a 32×32 grid of random values and successively advances by applying the transition rules of that famous automaton. The purpose of the exercise is twofold: first, to demonstrate some basic programming techniques and show how much you can do in Python with half an hour of free time; and second, to see how persistent and cyclic features arise from random configurations.
END_OF_DOCUMENT_TOKEN_TO_BE_REPLACED

I wonder how many instances of the phrase “quantum leap” Scott Bakula is personally responsible for? There is, as many others have observed before me, a hefty dose of irony in calling a major transition a “quantum leap” or “quantum jump,” as the original leaps to gain the name were the transitions of electrons between energy levels. We’re talking about an electron’s “orbit” changing its diameter from one zillionth of a centimeter to four zillionths of a centimeter. But science never stands in the way of evocative, quasi-scientific jargon!

It’s old irony, but it’s still worth a chuckle, as when India’s prime minister declares, “We need a quantum jump in science education and research.” Start at the top, my friend, start at the top. OK, points for effort:
END_OF_DOCUMENT_TOKEN_TO_BE_REPLACED

The people in charge of Taylor County, Florida’s science education are scientifically illiterate. Exhibit A:

Whereas, the new Sunshine State Standards for Science no longer present evolution as theory but as “the fundamental concept underlying all of biology and is supported in multiple forms of scientific evidence,” we are requesting that the State Board of Education direct the Florida Department of Education to revise/edit the new Sunshine State Standards for Science so that evolution is presented as one of several theories as to how the universe was formed.

. . . so that evolution is presented as one of several theories as to how the universe was formed.

Yes, and the American Revolution is only one of several explanations for the invention of agriculture, stone tools and fire.

Browsing the TalkOrigins Index of Creationist Claims, we find that the Taylor County school board has regurgitated CA041 and CA201, for starters. I never knew the job of a school board member was so easy!

Instead of a real post, here is another installment of “found poetry” — the search queries by which people have found their way to Science After Sunclipse:
END_OF_DOCUMENT_TOKEN_TO_BE_REPLACED 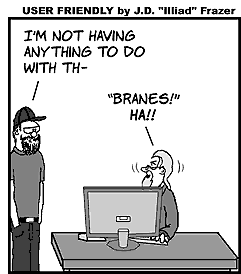 This may be an indication of how far string theory has seeped out into the general meme pool. I mean, I don’t think a webcomic — even one of general geek interest — has made a joke about gerbes lost forever like tears in rain.

The Honorable Frank Easterbrook, presiding over the judgment of the Q-Ray Ionized Bracelet (billed as a cure-all to end all cure-alls) had this to say in his ruling.

Defendants might as well have said: “Beneficent creatures from the 17th Dimension use this bracelet as a beacon to locate people who need pain relief, and whisk them off to their homeworld every night to provide help in ways unknown to our science.”

Judge Easterbrook also remarked thusly about “testimonials” which the Q-Ray people threw about to make their bracelet sound effective:

A person who experiences a reduction in pain after donning the bracelet may have enjoyed the same reduction without it. Thatâ€™s why the â€œtestimonialâ€ of someone who keeps elephants off the streets of a large city by snapping his fingers is the basis of a joke rather than proof of cause and effect.

Tip o’ the fedora to Rebecca.