Mike Stay has just posted “Category Theory for the Java Programmer,” an introduction to the subject intended for people with practical programming experience. This is the latest, but hopefully not the last, in a series of introductory articles on his blog:
END_OF_DOCUMENT_TOKEN_TO_BE_REPLACED

OK, after all that science talk, it’s time for some “mature viewers” content. Here is an adaptation which Julia Dameron directed of a scene in Warren Ellis’ Transmetropolitan, specifically Spider Jerusalem’s encounter with the President of the United States in a men’s room. The original can be found on pages 20–24 of Lust For Life (1998). Geek out, comix fans:

That’s probably as much of Transmet as you can film without a budget.

Rob Knop, having decided to leave ScienceBlogs.com, has discovered that the SB Overlords will remove the archives of his blog sometime during the next couple months. Rather than let them vanish entirely into the memory hole like a factual comment on a creationist blog post, I thought I’d mirror a few here at Sunclipse. (In no way will Dr. Knop be responsible for answering comments on these mirrors, or anything like that; I’d just like to preserve the information.) First up is an essay from 10 October 2007, “Supernovae: the source of cosmic rays.” I have something of an interest in big stars going boom — check the SNEWS link over in the sidebar and say hello to my old colleagues — so I don’t want to see good explanations of this stuff slip away into the aether.
END_OF_DOCUMENT_TOKEN_TO_BE_REPLACED

Yesterday, the International Conference on Complex Systems wrapped up with five talks on networks. For me, the most interesting was that by Dan Braha, who spoke about what happens when you analyze a system as a network which changes over time, instead of the aggregate network formed by lumping all the timesteps together. Imagine a system made out of a whole pile of parts. At time [tex]t[/tex], part number [tex]i[/tex] might or might not be interacting with part number [tex]j[/tex], which we could represent as a time-varying matrix [tex]C_{ij}(t)[/tex]. Many studies of network-related phenomena obscure the time-dependence part. For example, in a living cell, genes are switching on and off, concentrations of enzymes are going up and down, and all sorts of stuff is changing over time. You can mix proteins A, B and C in a test tube; perhaps A bonds both to B and to C. You’d then draw an interaction network with links connecting A to B and to C — but what if B and C are never present in the cell at the same time?

Braha and company looked at a collection of e-mails sent over 113 days, exchanged among 57,138 users. (The data comes from arXiv:cond-mat/0201476v2, published five years ago in Phys. Rev. E, and were gathered at Kiel University.) A node is an individual e-mail address, and a link is established when a message is sent from one address to another. They found, among other things, that whether or not a particular node is a “hub” changes over time: popular today, an outcast tomorrow. Moreover, a node which is in the top 1000 most connected on one day may or may not be in the top 1000 for the aggregate network. Furthermoreover, when the window of aggregation is gradually increased — from one day to two days, to a week, up to the entire time period — the similarity to the total aggregate network increases, as you’d expect, but without any threshold.

In the last few minutes of his talk, Braha did a brief overview of a related investigation, in which they studied a “social network” derived from Bluetooth devices. If my Bluetooth gizmo is within two meters of yours, we’ll call that a link. The network of Bluetooth devices will naturally change over time, so we can do the same comparison between the graphs observed at short timesteps to the graph formed by aggregating all connections. During the Q&A session afterwards — before I had to, ironically enough, run off to find my cell phone — I pointed out something which it appears Braha hadn’t fully grasped.
END_OF_DOCUMENT_TOKEN_TO_BE_REPLACED

I seem to have become the official Conference Paparazzus. Some of my photos are standard conference fare. For example, here’s Gregory Chaitin having a chat with his session chair, Bob Savit: 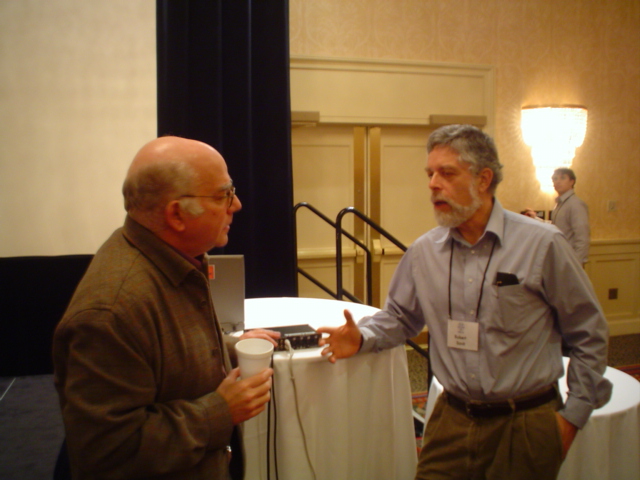 However, every picture I have of Philip Zimbardo looks at least a little. . . evil. 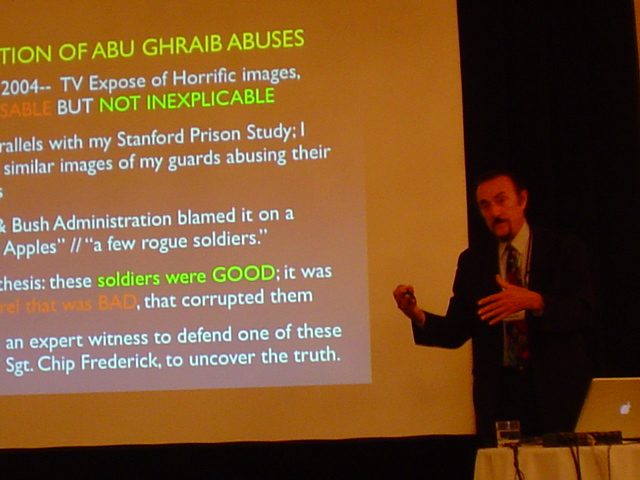 This is, in fact, how many of the people in the audience will remember Dr. Zimbardo:
END_OF_DOCUMENT_TOKEN_TO_BE_REPLACED

Okay, I’m uploading files to a MediaWiki 1.10 installation. If I try to upload a JPEG image with the execute permission not set (i.e., its entry in ls -l begins with -rw-------) then I get an error message:

Uploading another copy of the file with different permissions doesn’t fix the problem.