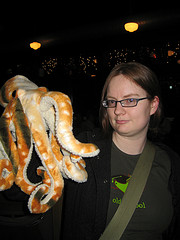 My colleague Dion and I arrived at the Cambridge Brewing Company about ten minutes early for the PharynguFest. At the bar, we met Joshua and Rebecca; Dion was the one clever enough to realize what an Iowa State sweatshirt actually looked like, so we could identify Jeff, who was conversing with Liz, who had brought Ocho the puppet. Ocho tagged along with me for most of the evening.

All the pictures of me look irredeemably goofy. I don’t understand it: all I did was wear a stuffed octopus on my hat and a shirt from sexandscience.net. (Jeff says he wants one to wear when lecturing to his class. Ah, the perks of professordom.)

After our crowd had spent a while clogging up the aisle-ways in front of the bar and pulling people in from outside — “Judging from the octopus, this must be the Pharyngula meeting” — the hungriest among us got a table for four, which somehow became a table for six, at which eight people sat down. If you wanted to explain the decentralized nature of blogging, there’s probably a good metaphor in here somewhere. The eight of us then ate, drank and conversed, while the people back at the bar kept drinking (and maybe found tables of their own — they vanished into the night by the time we had eaten). As wrote Liz the PixelFish,
END_OF_DOCUMENT_TOKEN_TO_BE_REPLACED